On November 11, 2017, the Runasimi Outreach Committee (ROC) and Quechua at New York University hosted the 3rd Annual Quechua Student Alliance Meeting, an all-day gathering sponsored by the Center for Latin American and Caribbean Studies at New York University, the Organizational Student Life Grant from the Graduate School of Arts and Sciences at New York University, the K-12 Outreach Program at the Institute of Latin American Studies at Columbia University, and The Center for Latin American and Caribbean Studies of the University of Illinois. The Meeting offered educators and future educators, students, advocates, program administrators, and other community members the opportunity to exchange their knowledge of Quechua language and culture with each other. Through various presentations and interactive discussions, the Meeting engaged its participants in Quechua language and cultural activities while raising awareness of the growing Quechua communities across New York and the U.S. as well as the increasing importance of Quechua language and cultural education.

The event began with paying respect to Quechua culture and language through a traditional ceremony called Q’oa, led by Julia Garcia, a language partner for Global Languages Network and a middle school teacher. This cultural ceremony grounded everyone in gratitude and in the values of Quechua peoples.

Following the ceremony, presentations and interactive discussions took place, including:
– a roundtable discussion on Quechua language learning in a University context, presented by Quechua professor Américo Mendoza-Mori, from University of Pennsylvania as well as Quechua instructor, Carlos Molina-Vital, from the University of Illinois, Champagne Urbana. Américo Mendoza-Mori recently published an article on this very topic titled “Quechua Language Programs in the United States: Cultural Hubs for Indigenous Cultures” in Chiricú Journal: Latina/o Literatures, Arts, and Cultures.
– a presentation on Quechua linguistics by PhD Student, Gladys Camacho, from the University of Texas, Austin
– a showcase on the community organization by the Quechua Collective of New York
– an interactive conversation on Quechua pedagogical strategies, involving games and activities, led by a New York University CLACS alum, Arleen Dawes
– a discussion and demonstration session of the New York-produced Quechua podcast, Rimasun, presented by Christine Mladic Janet, a PhD student from New York University
– a presentation on the digitization of Quechua, moderated by Diego Arellano, Undergraduate at the University of Ohio.

After supporting a local Ecuadorian restaurant Naño, who provided our lunch, all participants gathered to share “Ima Rayku?”(“For what reason?”), in which they discussed with each other why they are interested in, study, or teach Quechua. This activity shed light on a variety of reasons why Quechua education is of growing importance in the U.S. during this time of globalization and increased international migration. Beginning the afternoon session, ROC presented a community organization award recognizing the work of Kichwa Hatari, a Bronx-based radio program that aires in Kichwa/Quechua for the greater New York community. Ultimately, the Meeting successfully brought together Quechua language and culture advocates, students and educators, connecting New York with the Andes. In fact, the day after the event, Daniela Del Alamo Garcia, a teacher in Cusco, Peru at the Language Heritage Institute published an article on the Meeting in El Diario, Cusco. 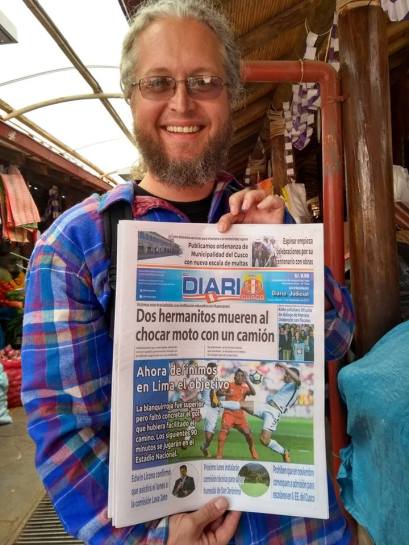 View all posts by meco